In the early-to-mid 90s, Blizzard Entertainment was still a young game development studio. They had achieved surprise success with their real-time-strategy (RTS) games Warcraft: Orcs and Humans in 1994 and its sequel, Warcraft II: Tides of Darkness, in 1995. Their next hit would be StarCraft in 1998.

No one knew, back then, that they’d become the behemoth of the gaming and eSports industry that they are today. Or that StarCraft would be the inception of the modern eSports era.

StarCraft started its days as the science-fiction of Warcraft. The original StarCraft that Blizzard showed off in pre-release in 1996 was nothing like the StarCraft we eventually got in 1998. That original product demo was based off the same engine as Warcraft II, looked like an ugly clone of Warcraft II, and was described by attendees and journalists as “Orcs in Space”.

Blizzard hit the drawing board once again, wrote an entirely new engine for the game, and changed all the in-game sprites into 3D models.

They had issues with the engine, as it was in a coding language that none of the developers were familiar with (C++). This led to bugs and crashes that forced the team to spend huge amounts of time fixing.

Their art department struggled to keep up with the demand for 3D models, which took significantly longer to prepare than sprites did. There was also the issue of the RTS genre beginning to fill up with serious competition, such as the Command and Conquer: Red Alert series and the Age of Empires series.

They took the theme and flavor of their original ideas and gave them the execution they deserved. Investing so much into a game was risky for a studio their size, and they needed the game to succeed.

Luckily for Blizzard, the game exploded in popularity once it was released in March of 1998. It was the best-selling PC game of 1998, and shipped 11 million copies worldwide by the end of its lifespan.

Blizzard were quick to react to their success, and in 1999, just a year after release, Blizzard released Brood War, an expansion pack for StarCraft. This was one of the first expansion packs ever released, and was the precursor to today’s DLC.

One region, in particular, seemed to have a greater love for StarCraft than anywhere else: Korea. Of the 11 million units shipped worldwide, 4.5 million of those units were accounted for by Korea alone.

Many Korean players played the game for hours on end every day, becoming extremely skilled at it. It quickly gained the partly tongue-in-cheek title of “the national sport of Korea”.The game was described, at the time, as perfectly balanced, with the only determining factor in victories being players’ skill. This made it perfect for competitive play, and the game was one of the few early titles to support online multiplayer back then.

Media companies in South Korea launche their own television channels and competitive leagues focused solely on StarCraft. Ongamenet the first, in 2000, with MBCGame following in 2002. Both ran all the way up to 2012.

The year 2000 was more than just a new millennium, it was also the first time we saw a large, stadium-based eSports tournament: the World Cyber Games Challenge (which we also mentioned in our deep-dive into the history of eSports).

174 competitors gathered in Korea to compete in games like Quake III Arena, FIFA 2000, Age of Empires 2, and StarCraft: Brood War. This one event was the spark to the powder keg, and the world was suddenly aware that competitive eSports was a legitimate source of entertainment and business opportunity.

We couldn’t find any photos or videos from the very first event, but here are the official photos from the 2001 World Cyber Games: 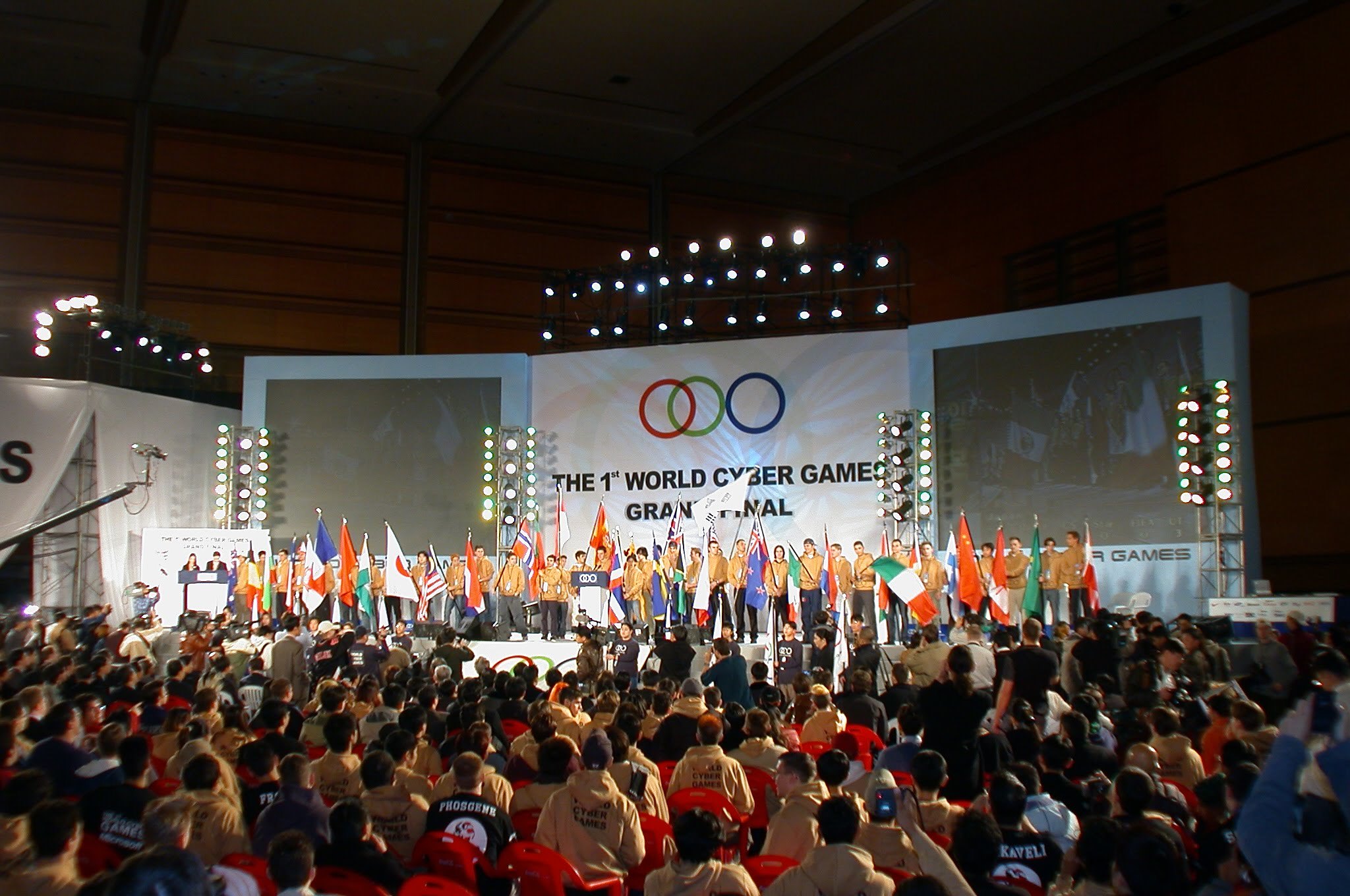 By 2002, StarCraft players began being signed on to professional teams, the very first eSports teams the world had ever seen. Large companies like Samsung, SK Telecom, and KT sponsored teams, taking advantage of the players’ new visibility. And thus, the concept of the full-time professional gamer was born.

The birth of the MOBA

The real-time-strategy genre may have waned in popularity over the last two decades, but the genre they moved to was birthed by Blizzard.

The biggest esports in the world are MOBAs (Multiplayer Online Battle Arenas), with the first big MOBA being Dota. The original Dota started its life as a mod for Warcraft III, and its design was based on StarCraft’s “Aeon of Strife stage.

The original Dota came out in 2003, and quickly became a regular at worldwide eSports tournaments; including the World Cyber Games, and even Blizzard’s own BlizzCon.

Dota’s biggest competitor, League of Legends came out in 2009, a full six years later, and eSports was never the same again. But that’s its own article, and likely a future installment in Gimbl’s Games That Changed Gaming.

For more gaming and eSports related content just like this, sign up to Gimbl now! Also, check here at the end of every month for our latest Gimbl Monthly Update, where we chronicle our journey towards launching our new platform for Streamers and their viewers.

A new Gimbl era – The Transformation

TwitchCon Update #6: And that’s a wrap!

TwitchCon – Our story as it unfolds..

How To: Get Started as a Streamer

The meteoric rise of Fortnite

eSports today and in the future: Streamers Assemble!

From Geeks to Gods: How eSports became what it is today

Twitch Con and beyond

Gimbl is a founding member of The Blockchain Game Alliance (BGA)

Esports betting as it should be,
take part of the action!